It is science Alone that can solve the problems of hunger and poverty, insanitation and illiteracy, of superstition and deadening custom and tradition, of vast resourses running to waste, of a rich country inhabited by starving people.

At AIIMS research is not just a routine activity but rather a mission with three objectives. As anywhere else, the primary purpose of research is to gratify curiosity by disciplined activity, thereby leading to creation of new knowledge. But at AIIMS, we are also conscious of the role research can play in improving the quality of teaching. A teacher engaged in research is up to date with recent information, and can also inculcate a sprit of enquiry and freedom of thought into his/her students. Finally, research at AIIMS is apart of our national endeavor to cultivate a scientific temper and to eliminate from our society the way of authority and superstition. 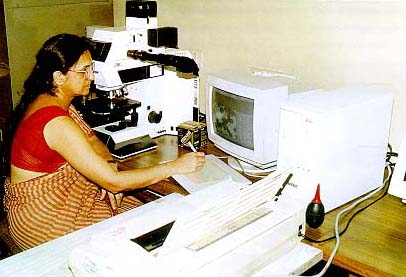 Image analysis system for quantitative a and stereological study of tissues.

Research at AIIMS is a part of our national endaeavour to cultivate a scientific temper and to eliminate from our society the sway of authority and superstition .

While AIIMS attracts sizeable grants from national and international agencies, the Institution itself also offers modest research grants. The grants are sanction after the projects submitted have been screened by a Committee and are primary meant to initiate the junior faculty into research. Thus, other things being equal, preference is given to younger application. After an investigator has made some progress, he or she can apply for bigger grants from other agencies.

There is a wide variety of research performed at AIIMS. On the one hand we do sophisticated investigations in the neurosciences, in genetics and on computer simulation of hormone-receptor interaction. On the other hand ,we undertake clinical and epidemiological studies on the prevention and treatment of national health problems. We are trying to apply advanced techniques such as DNA recombinant technology, immunology and electron microscopy to study the common diseases in our country such as leprosy, malaria , tuberculosis, diabetes, diarrhoea, hepatitis, fluorosis and iodine deficiency. We have large internationally funded programmes on goals-oriented research in reproduction aimed at widening the variety of acceptable contraceptives. The scientific publications emanating from the Institute have been quite steady at about 2 publications per faculty member per year. about half of these publications are in journals covered by the Science Citation Index. During the 8 year period from 1980-88, AIIMS topped the list of medical colleges in India with (mean ± SD) 237.5 ± 37.3 Science Citation index-listed publications per year (Reddy et al. Natl Med J India 1991; 4: 90-92).During the 7 year period from 1987-94, AIIMS topped the list of institutions engaged in medical research in India with 1630 Medline-listed publications (Arunachalam. Current Science 1997; 72:912-922).

The quality and range of research at AIIMS may be judged from the following highly selected assortment of some thrust areas.

In 1980s,40% of pediatric beds in hospitals were occupied by cases of diarrheal dehydration. In 1997 it is difficult to find such a case even for demonstration in many parts of India. Basic, applied and operational research done at AIIMS has played a pivotal role in achieving this transformation. Recently we have developed two types of super oral dehydration solutions based on amino concentration.

We are trying to apply advanced techniques such as DNA recombinant technology,immunology and electron microscopy to study the common diseases in our country. 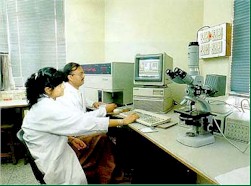 WHO will formally introduce this new formulation in the Global Diarrheal Disease Control Programme this year. AIIMS has developed an algorithm for the treatment of persistent diarrhea, which the WHO introduced in the Global Diarrheal Disease Control Programme in 1994. The bacteriumresponsible for 50% of the cases of persistent diarrhea has been discovered at AIIMS and provisionally named Enteroaggregative E.coli.AIIMS research on the role of zinc deficiency in diarrheal disease was cited by the "Time Magazine" in 1996 as good news for child health.

Flowcytometry in progress in the Biotechnology Laboratory

for identification of DNA ploidy and surface markers in cancer cells.

Rotavirus was demonstrated at AIIMS to be the major cause of diarrheal disease. Now we have developed a rotavirus vaccine in collaboration with the Department of Biotechnology, which is ready for phase-1 trials to be started this year.

Early and sure diagnosis of tuberculosis

AIIMS has developed a PCR test for the diagnosis of tuberculosis. The test, which is specially useful for extrapulmonary tuberculosis, gives the diagnosis within 24-48 hours of receiving the sample in contrast with conventional tests which take 6-8 weeks.Leprosy

Contributions of AIIMS towards research on this dreaded disease include:

A behavioural physiology study in progress.

By using modern DNA technologies at AIIMS, it has now become possible for the first time in India to study the strains of the parasite responsible for an epidemic.

AIIMS has developed indigenously a highly sensitive and specific ELISA system for detecting HIV antibodies. It costs less than half the imported test kits, and has detected many early cases which the imported kits could not.

AIIMS has developed indigenously a highly sensitive and specific ELISA system for detecting HIV antibodies.It costs less than half the imported test kits, and has detected many early cases which the imported kits could not. AIIMS has been one of the Reference Centres for HIV/AIDS since 1986, and the National HIV Reference Centre since 1992.

Epidemiological, clinical and basic research at AIIMS has assessed the magnitude of the problem, led to the development of an indigenous diagnostic test and a candidate vaccine, and a diagnostic assay system for screening blood donors for hepatitis C virus.

AIIMS was the first place in the world to use PCR on formaline fixed autopsy material to detect and confirm plague during the1994 outbreak. We have cloned, sequenced and expressed the f1 and pla genes of Yersinia pestis which are immunoreactive. These are being used for developing a serological test for plague.

AIIMS has defined the effect of iodine deficiency on growth and development, specially the role of thyroxine in brain development in human fetuses. Laboratory and field studies done at AIIMS paved the way for the 'Universal Salt Iodization Programme of the Government of India in 1986.Our Contributions to control of iodine deficiency extend to Bhutan, Nepal, Bangladesh, Maldives, Indonesia, Thailand and several countries of Africa and the middle east.

Titration method for estimation of iodine in salt.

Laboratory and field studies done at AIIMS paved the way for the 'Universal Salt Iodisation Programme of the Government of India. 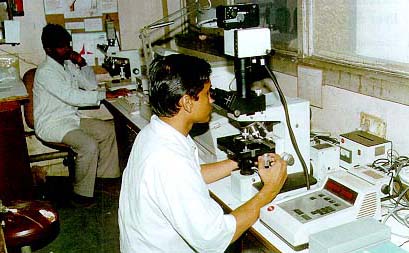 Much of the research that has been carried out in the last 25 years towards the development of an anti-human chronic gonadotropin (hCG) vaccine began with research initially carried out at AIIMS.

Basic Research on the endocrine and paracrine mechanisms in embryo implantation of pregnancy and the development of post-coital and post-ovulatory contraceptives.Our Primate Implantation Biology Laboratory has been recognized as a non-US Centre for Contraceptive Research and Development Programme of the Andrew Mellon Foundation and is also one of the 13 such Centres in the world supported on a long-term basis by the Rockefeller Foundation.

AIIMS has been participating in India's efforts at exploration of Antarctica since 1990.Besides providing health care to members of the expedition, AIIMS has also been using the opportunity to conduct research on chronobiology of the human organism, physiological responses to the stress of the hostile antarctic environment, and performance under the harsh and lonely conditions prevailing in antarctica. 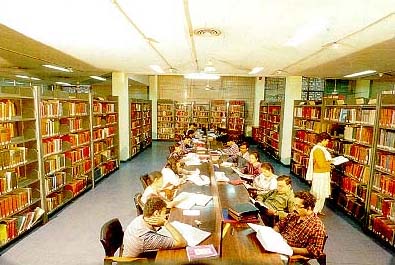 The library, named after the first Director of the Institute, is a treasure house having 61423 books, 53547 journals and 14008 reports in the field of Biomedical Sciences. The library receives 490 journals and 80 newsletters every year. The library is open to the readers from 8 a.m. to 2 a.m seven days a week. The Library has a computer facility, microfilm library reader and reader-printer facility The rich and efficient is a potent force for energizing our research activities.

A particulary busy hour in the B.B.Dikshit Library.